For years, some of the best medicines were also the most painful – in terms of their side effects and risks. At ChemoCentryx, we believe that great science can lead to better medicine. Our focus on the chemoattractant system is designed to allow us to do better by our patients by providing more targeted, and therefore, more effective medicines at a lower physical cost to the patient.

As drivers of inflammatory response, chemokines and their receptors present opportunities for the development of new drug therapies. ChemoCentryx is the only company focused exclusively on the discovery, development and commercialization of small molecule therapeutics that target the chemoattractant system.

We have developed a set of proprietary drug discovery tools to unlock the chemoattractant system’s complexity and to accelerate a productive drug discovery program. We have been able to accurately predict specific chemokine receptors for a given condition/disease and then identify and optimize orally-available drug candidates that are best suited to treat those diseases.

Our science has led to the creation of a broad pipeline of promising chemoattractant-based drug candidates as well as an extensive intellectual property estate.

Each of ChemoCentryx’s drug candidates is designed to target a specific chemokine or chemoattractant receptor, thereby blocking the inflammatory response driven by that particular chemokine, while leaving the rest of the immune system unaffected. Our compounds are designed to be highly potent and selective for their intended chemokine or chemoattractant receptor to minimize the risk of off-target effects. In addition, our orally administered small molecules may offer convenience and compliance advantages, as well as lower costs of production over most biologics.

Acute inflammation is characterized by the rapid onset of pain, heat, redness, swelling and loss of function. When inflammation is longer term, or chronic, and is directed at the body’s own tissues, this can result in various forms of autoimmune diseases. ANCA-Associated Vasculitis (AAV), diabetic nephropathy (DN), inflammatory bowel disease (IBD) and rheumatoid arthritis (RA) are some examples of chronic conditions in which an inappropriate inflammatory response underlies disease.

Many autoimmune diseases are highly debilitating, creating a significant social and financial burden. According to the National Institutes of Health, there were more than 80 clinically distinct and chronic autoimmune diseases that collectively affected as many as 23.5 million people in the United States in 2010.

By selectively blocking a given chemokine and chemokine receptor combination, and largely leaving other chemokine-chemokine receptor interactions unaffected, we believe that even aggressive forms of chronic inflammation and autoimmunity can potentially be brought under control in a safe and effective manner.

In recent years, conditions that were not previously considered to be the result of inflammation, such as Type 2 diabetes, chronic kidney disease and cancer, have joined the long list of human diseases thought to be the result, at least in part, of uncontrolled and chronic inflammation.

For instance, in cancer, it is known that tumors induce the expression of chemokines that are involved in promoting the growth of blood vessels that feed tumors, providing a link to the chemokine system’s role in the establishment and spread of cancer. In addition, certain chemokine ligands and their corresponding receptors have been implicated in the survival, growth and metastasis of human cancer.

In the case of angiogenesis, blocking a given chemokine and chemokine receptor combination, can slow the growth of  blood vessels that feed tumors and enable the body’s own immune response to attack cancerous cells. 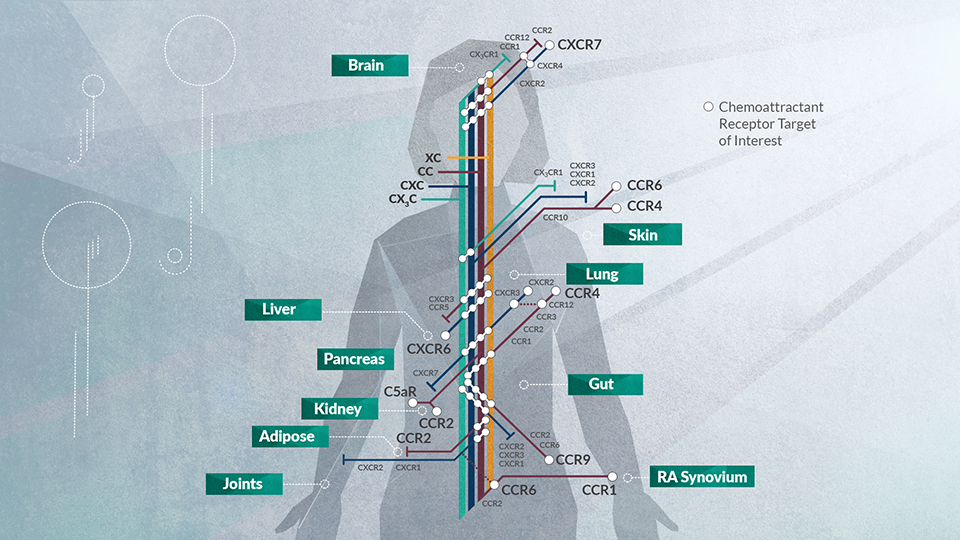